Self-tapping screws (https://www.drywallscrew.net/product/self-tapping-screw/) began to be commercialized in 1914. The first design-mainly derived from wood screws-was a carburized steel cone-tailed A-type threaded screw. The main purpose at that time was to join the iron sheet on the air conditioning system duct. Therefore, it is also called iron screw. After more than 80 years of development, it can be divided into four periods-thread forming, thread cutting, thread rolling and self-drilling.

Thread-forming self-tapping screws are directly developed from metal screws. When thread-forming self-tapping screws are used, they must be drilled in advance, and then the screws are screwed into the holes, and they are forcefully extruded to match the female threads. The material will be squeezed between the male threads, this is called thread forming self-tapping screws. It can only be applied to thin and plastic materials, so it has been developed; Thread Cutting Tapping Screws-in the thread One or more cutting holes are cut at the end, so that when screwing into the pre-drilled hole, the screw tail and teeth are used to cut the matching female thread in a similar way to a screw tap. It can be used on thick plates, which are harder or Fragile materials that are not easy to mold.

Self-drilling self-tapping screws-also known as Tec. In all the processes of assembling self-tapping screws, the most costly preparation is the preparation of pre-drilling. The use of self-tapping screws must first be drilled. And the hole diameter must be limited. No need. Pre-drilling can save costs in some aspects. This is a self-drilling self-tapping screw that integrates drilling, tapping, and tightening in one operation. The surface hardness and core hardness of the self-tapping screw are a little higher than that of the general self-tapping screw. It is because the self-drilling screw has one more drilling operation, and the self-drilling screw still needs to be penetrated to test that the screw can drill and tap the thread within the specified time. The above are the design and During the development process, there are two other types of screws with special thread designs. The first type is: High-Low Tapping Screws-used in plastics or other low-density materials. Double thread design, high thread (larger tooth outer diameter) has a flatter and sharper thread angle of 30 degrees. Low thread (smaller tooth outer diameter) has a 60 degree thread angle, and the tooth height is only high Half of the thread. The combination design of high and low threads reduces the rotation torque, improves the pull-out strength, and greatly reduces the risk of rupture of the combined workpiece. Another type is used for the assembly of drywall in the construction industry. It has this Self-tapping screws with similar thread design are especially suitable for plastics, parts boards and wood.

The other is; double-thread self-drilling horn head self-tapping screw-it can be easily screwed into the dry wall during assembly, self-drilling a hole in the steel threaded rod and tapping the matching female thread. Its horn head has a recessed bearing The surface can not be damaged to the wallpaper or plaster surface when screwed in. Most of the self-tapping screws are for commercial purposes, for example, when the self-tapping screws are provided as a combination screw (SEMS), it can provide a closer service. And screws such as Special designers with thick and thin threads focus on preventing loosening after assembly. 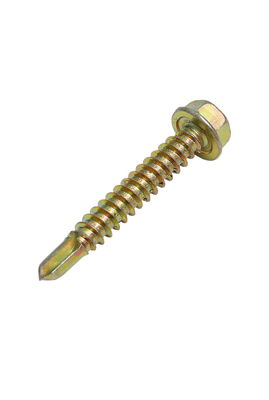 PREV: Instructions for ordering stainless steel screws      NEXT: How to mark the screw thread